With the 1-0 loss to the Long Island Rough Riders the previous evening weighing heavily on their minds, the Washington Spirit Reserves snapped their recent scoring drought to down the New York Magic 2-1 Sunday night. A pair of second half goals by Spirit Reserves forwards Ashley Herndon and Amber Stobbs proved just enough to get by New York and exorcise the Washington scoring demons of late. The Washington Spirit announced the acquisition of forwardLindsay Taylor and a conditional fourth-round pick in the 2014 NWSL College Draft from the Seattle Reign FC in exchange for the Spirit’s 2014 College Draft second-round selection. 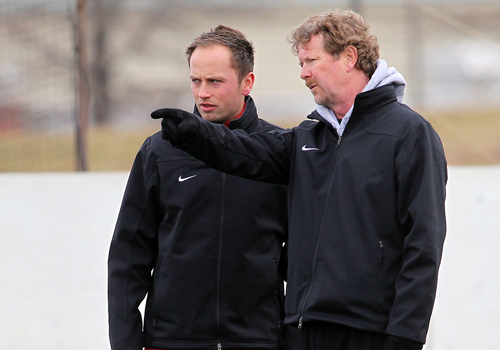 The Washington Spirit announced that Mike Jorden has been relieved of his duties as head coach. The Spirit’s current W-League head coach Mark Parsons has been appointed as head coach for the NWSL team for the second half of the 2013 season. Skogerboe named to W-League Team of the Week

The W-League announced its Team of the Week on Thursday, honoring the top players in league matches over the previous weekend. Spirit Reserves defender Jennifer Skogerboe earned a spot on the elite eleven for standout performances against both Long Island and North Jersey, contributing to a defensive effort that shut out both opponents. While it has been a challenging inaugural campaign in the NWSL for the Washington Spirit, the unique housing situation that arose for two of the team’s Canadian national team players, Diana Matheson and Robyn Gayle, has turned into one of the most intriguing off-field storylines of the league’s first season. The Washington Spirit lost 2-0 to FC Kansas City on Sunday afternoon at Shawnee Mission District Stadium in Kansas City, Mis. The match was the first-ever meeting between the two sides.

After scoring seventeen goals in their previous three games, the Washington Spirit Reserves struggled the full ninety minutes to find the net in the eventual 0-0 tie with the North Jersey Valkyries Saturday afternoon in Wayne, New Jersey. Washington had their chances throughout the day, but seemed unable to muster enough perseverance to break through the North Jersey defense. Match Preview: Spirit on the road for innaugural match-up with FC Kansas City

BOYDS, Md. (June 21, 2013) – The Washington Spirit head back out on the road looking to end a three-game skid in their inaugural clash with FC Kansas City at Verizon Wireless Field in Overland Park, Kan., on Sunday, June 22, at 4:10 p.m. ET. The match will be shown via live stream on the NSWL YouTube channel.

Conny Pohlers joined the Washington Spirit on the practice field for the first time on Wednesday. Following a three-week break after helping her home club, VfL Wolfsburg, capture its first UEFA Women’s Championship last month, the veteran German striker and all-time leading scorer in European competitions (42 goals) hopes to be in the lineup when the Spirit (1-5-3) attempt to snap their three-game winless skid at FC Kansas City on Sunday. Spirit Reserves get past Long Island 2-0 Stobbs again named to W-League Team of the Week The Washington Spirit have agreed to loan terms with German forward Conny Pohlers. The 34-year-old striker is coming off an historic championship campaign with Bundesliga club VfL Wolfsburg during which she became the all-time leader in goals scored in European competition.

Washington Spirit players Robyn Gayle and Diana Matheson have been selected to play for the Canada Women’s National Team in the upcoming international friendly against Germany on June 19 at Benteler Arena in Paderborn, Ger. The W-League announced its Team of the Week for Week 4 of the 2013 season this Wednesday, honoring the top players in league matches over the previous week. Following two wins over the week, Spirit Reserves forward Amber Stobbs nabbed a spot on the elite eleven while teammates Katie Yensen, DiDi Haracic, and Ashley Herndon garnered Honorable Mention accolades.

Several Washington Spirit news stories have hit the national media over the past week. Here is a sampling of some of those hot topics. The Washington Spirit announced that defender Ali Krieger has been named to the U.S. Women’s National Team roster ahead of two matches against Korea Republic on June 15 (7 p.m. ET, ESPN3) at Gillette Stadium in Foxborough, Mass., and June 20 (7:30 p.m. ET, NBC Sports Network) at Red Bull Arena in Harrison, N.J.

Several Washington Spirit news stories have hit the national media over the past week. Here is a sampling of some of those hot topics, including stories done by Sports Illustrated and the Washington Post.